A Passion for Trashion: How Trash Bags Have Influenced Pop Culture

At PlasticPlace, we’re all about trash bags. It’s a pretty glamorous field. At least, we think so… but you’d be surprised how much cultural influencers think so too. In fact, tastemakers everywhere – the Hollywood elite, pop artists, bestselling authors – are incorporating trash bags into their most iconic work. After all, trash bags are plasticky, shiny, and unlike anything else – so they’re iconic by nature. Just read on to find out how “Trashion” – that is, trash in fashion – is taking over the world!

1. “Garden State” – Yelling into the abyss 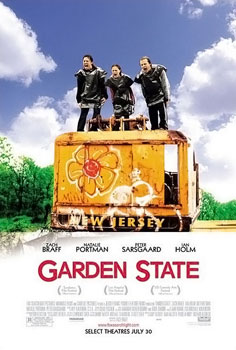 “Good luck exploring the infinite abyss!” With this line, Largeman (Zach Braff) shakes back his head, thrusts his arms skyward, climbs what looks like a tractor overlooking a chasm, and yells his crazy little heart out. Buddies Mark and Sam (Peter Sarsgaard and Natalie Portman) follow suit. During this cathartic, primal-yelling scene, the characters sport makeshift rain-gear fashioned out of garbage bags. The abyss, as we gather, stands for hope, fear, presence, the act of living itself… and the yelling indicates they are no longer afraid to plunge right in. Garden State’s “yelling into the abyss” moment is iconic, with a distinctive look and feel – a moment that has inspired an entire generation of hipsters, intellectuals, and sensitive emo kids. The movie’s costume designer Michael Wilkinson, who also designed the memorable shirt that matches the wallpaper, reminisces about the film’s visual idiosyncracies: “A fond memory is crafting costumes for Natalie Portman out of trash bags.” If you loved this movie… maybe a 10-foot poster of this scene is plastered on the wall of your living room, or maybe it simply lives in your geeky heart forever. But you will never forget the trash bags that made the magic happen.

In 1997, Missy Elliott released her video, “The Rain,” off her first album, “Supa Dupa Fly.” Her look on the video took the music world by storm. In classic nineties fashion, she and her posse dance in color-blocked outfits; they rock white leather on the beach; they sport men as accessories. But by far her most memorable look is the one where she dances in an inflated garbage bag. Bloggers say: “This may be the boldest fashion statement in music video history.” By cavorting in a blown-up garbage bag, Elliott lampoons detractors who say her size is an impediment to stardom – and throws size-ism back in their faces with a puffy garbage bag. In doing so, Elliott broadcasts a message of acceptance for all sizes and shapes. Later, haters!

The groundbreaking 1999 movie “American Beauty” features two-and-a-half minutes of a plastic bag blowing around on a sidewalk. Spoiler Alert! Don’t read on if you want to see the movie, but haven’t yet. The bag sequence appears toward the end of the movie – it reappears after the narrator, Lester (Kevin Spacey), has died. Lester’s final posthumous narration, with images of this ghostly, yet spectrally beautiful, garbage bag blowing around in the wind, seems to represent a view of Earth from the afterlife. It magnifies the importance of items that are mundane and terrestrial, everyday and unnoticeable – it’s an ode to how precious, solid, and meaningful these things seem in retrospect. (Well, that’s how I view it, anyway!) The sad, intense final trash-bag sequence suggests there is beauty in trash bags – a great and poignant beauty – but we can only see when we are not truly looking.

Image Source: The Globe and Mail

Here’s another iconic look from another Oscar movie. In “Silver Linings Playbook,” day after day, unbalanced character Pat (Bradley Cooper) dons a garbage bag to go running. (In fact, it’s the outfit that has spawned a million Halloween costumes.) Why did Pat choose to wear this garbage bag? “Legend has it that wearing a garbage bag under or over your clothes while running will help you lose weight faster by trapping in your body heat thereby making you sweat more.” In reality, this trick only gets rid of water weight. Of course, Pat is a bit irrational and overeager, so his faulty reasoning suits him. The movie’s costume designer, Mark Bridges, explains the garbage bag attire: “It really sums up that working-class world, and also [Pat’s] dedication to try to get back into shape to win his life back by any means necessary—even by looking ridiculous and causing complete humiliation to the whole family by running down the street like that.” Hear that, trick-or-treaters? You’re humiliating your entire neighborhood… Just kidding.

Last but not least, in “New Girl,” the character Schmidt appears in a garbage-bag diaper. Why? Well, we’d rather not mention the reason he’s wearing it. (Something about recovering from a certain type of surgery...) Let’s just say it’s an unforgettable look. So there you have it, folks, the top 5 most iconic garbage-bag moments from Hollywood history. Read our next post for more trash-bag tastemakers’ talk… Next up is Nostalgia Edition!