Trashion – that is, “trash in fashion” – isn’t just cool for us hip inhabitants of the present-day. In fact, Trashion has been on-trend for decades. You just have to scratch beneath the surface a bit – or should we say “lift the lid”? – to fully appreciate it. Let’s take a trip through time and explore Garbage-Can Chic from eras past. 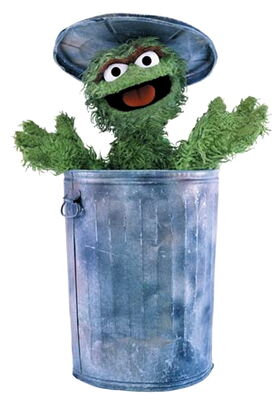 Family-friendly monster Oscar, who debuted with “Sesame Street” itself in 1969, is the original glorifier of all things trash. Fun fact: Oscar was originally orange when he was introduced! (By 1970, he had turned green, as a result of dampness at his favorite vacation spot, “Camp Mushy Muddy” – but in reality he changed color because the cameras in those days weren’t good enough to capture the color orange.) Oscar’s personality is reputed to be based on an amusingly rude waiter, and his voice on a rude cab driver. Oscar is a sentient being who lives inside an aluminum can shell and pops out occasionally with cranky-but-funny messages for humanity. He even has his own theme song, “I Love Trash,” just to prove that he genuinely adores the stuff. Oscar is an original – possibly the first Garbage Advocate in history! It’s often surmised, in song, that Popeye “lives in a garbage can.” However, that information might just be an urban myth. (Rumors swirl about Popeye’s living conditions – does he actually live in a caravan, frying pan, or watering can? And does he go “swimmin’ with women” or not?) Despite this confusion as to his actual place of residence, we’ve included Popeye on this list for his brave service in the call of duty, including his major contribution to the “garbage-can-as-home” genre. And for eating his spinach! 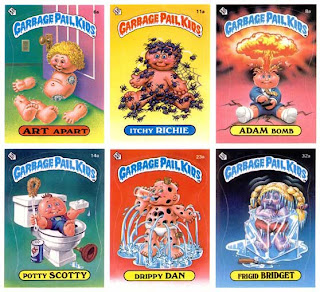 We will never forget this Eighties classic: collect-and-trade cards that built their reputation on the hysterical concept of garbage. The GPK were based on the squeaky-clean Cabbage Patch Kid dolls, but they delightfully warped that bloodline with their perverse jokes. The GPK were wonderfully icky, and they got weirder and weirder as the years went on, morphing from relatively innocent cards like “Adam Bomb” to… well, completely yucky ones we’d prefer not to remember. Oh garbage, that evergreen source of kids’ comedy!

4. Better Off Dead In “Better Off Dead,” a film that practically jumps out of a 1985 time capsule, high-school student Lane Myer (John Cusack) gets dumped by his frivolous girlfriend, and loses the will to live. He tries to kill himself a number of times throughout the movie, but since it’s essentially a light and frilly comedy, he never attempts this task too arduously. At one point, Lane is about to jump off an overpass onto the highway below, but a friend stops him to talk some sense into him. Lane changes his mind, so the friend supportively slaps him on the back. Of course, this prompts Lane to tumble over the bridge and into a passing dump truck. He ends up lying in a trash bin, where two sanitation workers see him and say: “Man, that’s a real shame, when folks be throwing away a perfectly good white boy like that!” No garbage, that’s one of the funniest lines of the Eighties. Watch it on YouTube. 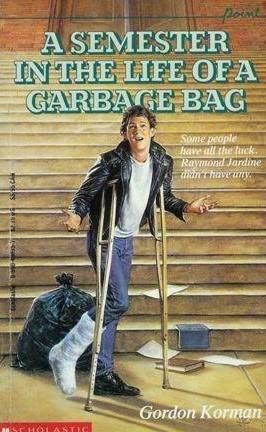 5. “A Semester in the Life of a Garbage Bag” – by Gordon Korman Source: Goodreads

Gordon Korman was one of my favorite authors when I was a kid. His books were always hysterically funny, and A Semester in the Life of a Garbage Bag (1985) is no exception. This Young Adult Novel focuses on the character of Raymond Jardine – who always refers to himself in third person, as, yes, “Raymond Jardine” – and his utterly luckless life. Raymond considers himself quintessentially unlucky, so he’s obsessed with winning a trip to the Greek Island of Theamelpos, purported to bring luck to all who visit it. The book follows Raymond as he becomes aggressively competitive over the prize. The “garbage bag” in the title may be figurative, but it captures the mentality of many self-identified luckless tweens who have cherished Korman’s humor over the years. That’s enough trash talk for now! Thanks for reading our rundown of Trashion in Culture.